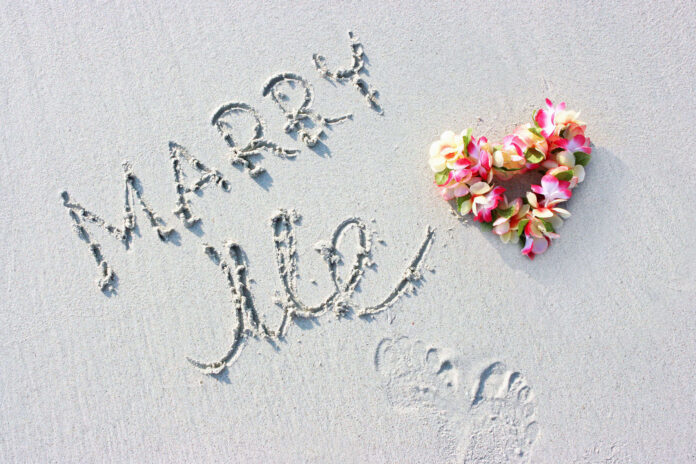 12 Signs He Wants To Marry You

Getting to that point in the relationship where you just aren’t sure what is going through his head or you think you should start preparing yourself for a ring to fly out of his pocket can be mentally draining. Asking yourself “Does he want to marry me?” Don’t over think it though! Everything happens when it is supposed to. Enjoy the stage you are at because once you move past it, things will never be exactly the same. These points may not mean anything standing alone, but if a few of these Signs He Wants To Marry You are relatable, it is probably a great sign. Just remember to always enjoy where you are now and don’t get too caught up in the future.

1You have talked about the future.

You have talked about both your futures together. Not a single future revolving around just your or his dream, but a combined future where both of you achieve what you want. You have talked about where you want to live, how you both can accomplish your goals, and a lot more. Talking about the future is so important, you have to be on the same page for a marriage to work and be successful. Setting a plan is a great thing, it will change and unexpected things will happen, but having plan you both agree with and both have to make compromises for is the start to a wonderful relationship and marriage.

2You have talked about getting married.

This is a huge sign. If you have talked about getting married, he has it in his mind that he thinks you are the one he is going to marry. Like I stated in the previous question, things can always change, but this is a huge indicator. It plays into talking about the future. If getting married is in your plan, it is more than likely going to happen.

3He tells you he loves you a lot.

This is a silent I love you most of the time. Like when he hugs you tight, holds your hand, kisses your forehead, or comes up behind you and hugs you while you’re washing  dishes. He does things that really make you feel loved even when he doesn’t say it, but he still says it quite a bit too. You feel so loved, like you are perfect together, and like he loves you more than he has ever loved anyone. And you love him more than you have ever loved anyone.

4You’ve had intense conversations about stuff you shouldn’t be worried about yet.

For me these conversations are always about when we have kids someday. We haven’t even been dating a year and for some reason we have talked about our future children in three conversations. I have had friends who have had a variety of conversations that they felt was too early to talk about in the relationship, so it doesn’t just have to be about kids. This sign is determined by how you feel about the conversation. If you feel like you are talking about living together way too soon, it’s the same thing. Having these conversations even when it feels a little weird is a good thing because it means you are getting on the same page with your boyfriend (back to number one, making a plan). These conversations should make you feel good though too, it shouldn’t just be an “oh my gosh, why are we talking about this,” feeling. If you don’t leave the conversation happy about your future together, it might be moving too fast, or he might not be the one.

5He has a picture of a ring you like on his phone.

Somehow he walked up behind you in the middle of a Pinterest wedding board pinning marathon, or you were shopping for a necklace for you mom and happened to see a ring that made your jaw drop. There could be a million explanations for how he got this picture, but he seized the opportunity and now has a picture of a ring you love on his phone. Believe me girl, a guy who doesn’t want to marry you wouldn’t have take a picture, I promise. Incidents like this are acceptable for a sign too. For example, my goofy younger sister fake proposed to me in the middle of a department store with a huge fake ring. Surprisingly, her judgment on what size my left ring finger was, was spot on. I accepted her fake proposal before telling her to go put the ring up. I caught my boyfriend looking at the size before she ran off (yes, I was unbelievably happy for the rest of the day lol).

Like big, yelling fights that you started about something stupid. Every couple has fights and if you stick through the bad ones, and wake up the next morning with a kiss and an “I love you” or an apology, you have a man that will want to marry you. Why would you want to fight with someone and almost immediately forgive them if you don’t love completely? You have to be able to fight while still loving each other. Marriages where the couple never fights are like unicorns: hard to find or nonexistent, depending on how you feel about unicorns. In the past, with previous boyfriends when we had a full blown fight, we broke up shortly after. After having one with my current boyfriend, everything went back to normal the next day. (Your definition of a full blown fight may be completely different than mine. It just depends on how you view bad fights)

7His parents have made some comments that made you wonder.

His parents know him better than anyone else. They can tell when he has a temporary girlfriend or one who is wife material. If his parents, or yours for that matter, have ever made a comment that seemed like they were talking about the two of  you getting married there is a good chance he is going to marry you. He may have even talked to his mom and dad about marrying you, if they have made an extremely direct comment.

8You know how long he is going to wait before proposing

You have talked about how long is too long and how soon is too soon. I know mine wants it to be after a year just dating (lucky for me we are coming up on our first anniversary very soon, eek!). Depending on how old you are or where your are in life the length could be months or it could be years. Everyone has to figure out their standard, and unfortunately us girls don’t have much say on when he will actually do it. My boyfriend was the one who initiated this conversation, he asked me how long you had to date before you could get married, I replied “I don’t know, six months, a year. When you know you know so I guess you can’t really put a time on it. Everyone is different.” He agreed with me, but still said he thought it needed to be close to a year. There is a reason the logical thinking men have the power of proposal and not women lol. If he’s the one at the end he will pop the question and say “I want to marry you!”.

You talk about how much you hate getting out, what you need from the grocery store, what movie you should go see next week, what family plans are happening in the next month, and on and on. You will recognize the conversations because you have heard your parents have them. You get to the point where you realize being married won’t be all that different. I mean you’ll have his last name, file your taxes together, and you will officially and permanently live together, but the day to day life won’t be that much different.

10He has said “you drive me crazy” but he’s still around.

All men claim that women drive them crazy. And I am sure they make a strong point haha. If he has told you, you are driving him crazy, but he didn’t get mad or didn’t storm out of the building and refuse to call you again, he loves you enough to marry you. My boyfriend usually says this with a huge smile on his face and is usually followed by “stop talking.” It always makes me giggle because he is very quiet and I can’t stop talking. We know this and when he says this I know he isn’t meaning it hurtfully, I have just been talking for the last hour non stop.

11He wants you to achieve your goals, and be happy

He talks to you about your goals, and how awesome it would be if you could become an author or an amazing surgeon. He talks about how he can help you achieve your goals or what you could do to achieve them faster. When he is determined as you are about you achieving your goals, he loves you enough to marry you.

12He does things he doesn’t want to do for you

It’s detox time and you think it would make him feel better too so you talk to him about it for a week, and you know he is completely against it. But when detox day one rolls around he is ready and asking what he needs to do. He knows you had his best interest in mind and feels bad for telling you it’s stupid, so now he is ready to detox even though he hates it. This could be anything from hanging out with your family when he really just wants to relax after work, to taking you to see the new sequel to that chick flick he hated but you loved. If he makes sacrifices for you, he loves you enough to marry you.