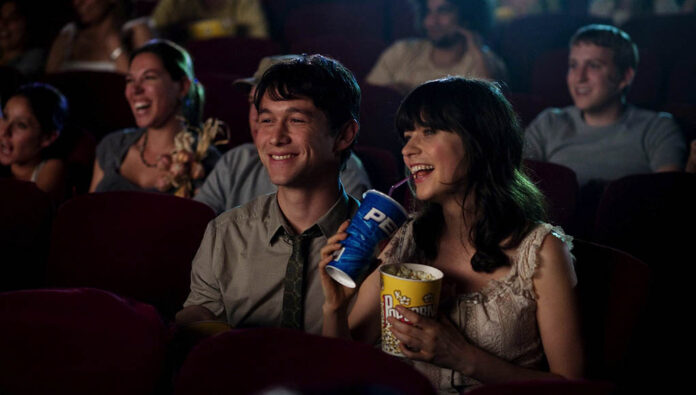 Joseph Gordon Levitt and Zoeey Deschanel may both be married (no, not to each other), but we’ll still remember them as Tom and Summer forever. How can we forget the beautiful Smith-loving couple that fell in and then out of love onscreen to our eternal dismay? From the beginning of the movie we are told that “this is not a love story” — and while we beg to differ, the unconventional storytelling of this film sure is a breath of fresh air.
Here are 12 other movies that will bring you the same joys and thrills of atypical romcom 500 Days of Summer, with their own unusual and fresh touches.

Released 10 years before 500 Days of Summer, here’s a romcom you may not have heard of! Anna (played by Julia Roberts) is a world-famous actress who through a series of coincidental run-ins, falls in love with an ordinary bookstore owner named Will (Hugh Grant). The pressures of Anna’s fame and having to hide their relationship from the press strains their normal boy meets girl story. The vividness and candor with which the movie star life is painted gives credence to the underlying idea that Anna’s great fame comes at the cost of her happiness as an ordinary person.

2Eternal Sunshine of the Spotless Mind

Have you ever broken up with someone and wished you could forget them and your relationship? Eternal Sunshine explores this very idea by combining science fiction elements with the age old themes of love and soulmates. Jim Carrey and Kate Winslet play a couple that undergo a procedure that erases their love story from their minds. However, Jim Carey’s character finds himself inexplicably drawn to Montauk and spontaneously decides to take a train there. On the train he runs into Kate’s character, and they are both drawn to one another, without remembering anything from their history. Though this forgetful brain operation doesn’t exist in our world, the film brings up relevant questions- namely, can we maintain our identity without chunks of our memory? And, is it better to forget painful experiences?

The timeless music of the Beatles brings life to couple Lucy and Judd as well as the entire 60s generation. Jude (Jim Sturgess) is a Liverpool boy who meets Lucy (Evan Rachel Wood) when he goes to America to search for his long lost father. They move to New York to start a carefree life together where they meet characters like the Joplin-esque Sadie and Jimi Hendrix-like JoJo. Their youthful innocence and love is tested as the times take a dark turn. With the Vietnam War looming, Jude retreats more and more into his artistic world while Lucy is drawn to anti-war activism. This difference begins to separate them which we see through the lens of 32 Beatles covers that kaleidoscopically whirls them in and out of each other’s arms all while evoking the longing of the decade.

Tenderly showing the complicated side of marriage and friendship, Celeste (Rashida Jones) and Jesse (Andy Samberg) are a married couple who have divorced, but are acting as if they’re still together. Exploring the tricky terrain of becoming platonic friends after lovers, Celeste and Jesse draws on the real life experience of Rashida Jones and Will McCormack (who plays a stoner friend). Rashida and Will dated for a few weeks before realizing that they were better off as friends and creative collaborators and this unique, convention-breaking relationship was the basis for Celeste and Jesse’s. Similar to 500 Days of Summer, the movie isn’t sickly sweet with fairy tale promises, but shows the sad realities of relationships, their end and the moving on process.

5The Fault in Our Stars

A screen adaptation of the bestselling novel by John Green, The Fault in Our Stars follows the love story of two high schoolers with cancer. Intelligent and practical Hazel (Shailene Woodley) has been sinking into apathetic depression as she awaits her inevitable death. She is forced by her parents to attend a support group in a church basement where she meets charismatic Augustus (Ansel Elgort) who to her great surprise, asks her out. Though reluctant at first, she finds herself slowly falling for him and his irreverent and intellectual personality. A great ode to the ephemeral nature of life and the role of pain and suffering within it.

Arctic Monkey fans will be pleased to hear that this movie is set to the crooning of Alex Turner, who wrote the soundtrack especially for the film. A coming-of-age story with a dark edge and ironic, comical touches, Submarine follows a 15 year old schoolboy’s love life. Young Oliver Tate (Craig Roberts) imagines himself as a romantic hero in a film of his own life, resplendent with French New Wave flairs. With voiceovers and freeze frames a plenty, Oliver narrates his tumultuous relationship with pyromaniac, tough girl Jordana (Yasmin Page) as well as his own endearing efforts to save his parents’ floundering marriage.

Sleepwalk With Me tells the semi-fictionalized, autobiographical story of comedian Mike Birbiglia’s struggle to find his creative voice as well as his commitment issues with an 8-year relationship. Matt Pandamiglio (Mike Birbiglia) sister announces her imminent wedding which forces him to consider marriage with his own girlfriend Abby (Lauren Ambrose). This causes him so much anxiety that it results in the dangerous habit of sleepwalking. As he fights progressively dangerous creatures in his dreams, he has to deal and come to terms with the rapidly changing reality of his waking life.

Have you ever wished you could just create your perfect significant other? Calvin Weir-Fields (Paul Dano) is a writer who’s struggling to follow up his last best seller. In a dream-like sequence he sees a beautiful girl, who inspires him to break his writer’s block. He brings her into being as Ruby Sparks, a 26 year old girl from Dayton, Ohio. As his story progresses, he feels like he’s falling in love with this woman he has created. To his shock, he comes home one day to find a real-life version of Ruby (Zoe Kazan) in his house. Thinking he has gone crazy he first refuses to accept her as real. When it becomes evident that she is indeed a real person, he begins to experiment with his power by writing instructions that she can’t help but to follow, with less than ideal results. The slightly surreal windings of the plot will have you wondering, what is it like to be a woman created as a man’s fantasy?

Juno’s Michael Cera plays heartbroken Nick, a high schooler who’s is dumped by his girlfriend, on his birthday. He sends her a series of mixed CDs, all of which she dumps into the trash. A friend of the ex-girlfriend, Norah (Kat Dennings), develops a distant crush with Nick after fishing out his CDs and listening to them. They run into each other at a concert where she asks him to be her pretend boyfriend for 5 minutes, which leads to an entire night of shenanigans as they track down her wasted friend and search for the too-hip band, Where’s Fluffy? We Are Scientists, Devendra Banhart and Vampire Weekend are just some of the real bands that comprise the soundtrack to this exuberant New York adventure.

Drew Baylor (Orlando Bloom) is having a very bad day. First he is fired from his job as a shoe designer, and then his girlfriend (Jessica Biel) dumps him. Depressed and suicidal, he gets a call with the news that his dad has passed away. En route to his father’s hometown in Kentucky, he meets chatty flight attendant (Kirsten Dunst) who later becomes his love interest. Along the way he grapples with his boisterous extended family, the loss of his father and what it means to truly live. A great movie for music lovers, the soundtrack expertly weaves in hits by Elton John, My Morning Jacket and Tom Petty.

Another romcom that cleverly incorporates science fiction, Sliding Doors explores the ideas that a split second action can create alternate universes where different fates play out. One morning, Helen (Gwyneth Paltrow) is fired from her job and rushes to the subway station to go home to her live-in boyfriend. Here the narrative splits into two possibilities – in one she misses the train, and in the other she makes it in time. Without revealing too many details, one outcome is decidedly better than the other. However, it isn’t until Helen’s knocked unconscious and sees glimpses of her alternate future that she makes the changes necessary to lead her to a happily ever after.

Opting out of the romcom trope of using unrealistically attractive “ordinary people” as the main characters, Bridget Jones tells the tale of a middle-aged, chain smoking woman of average build, showing viewers that you don’t have to look like a movie star to have a love story. The movie begins with Bridget Jones vowing to make herself more attractive to men by losing weight and cutting her penchant for smoking and drinking. Though she fails with these efforts, the movie ends with Bridget Jones caught in the middle of two men vying for her attention (so it worked out in the end). Perfect for those who enjoy a side of sharp wit with their romance, Bridget Jones’s Diary pokes fun at everything from the London dating scene to married life to womanizing men.