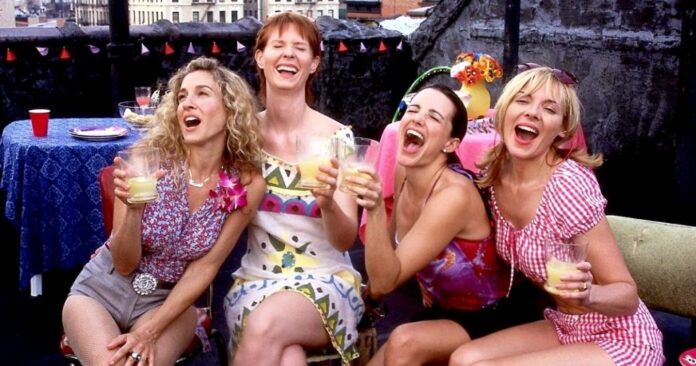 It’s been SO MANY YEARS since the iconic show that is Sex and the City finished it’s incredibly legendary run on HBO. It was a groundbreaking program that shattered stereotypes and worked to shape and mold our cultural understanding and ideas about female sexuality, friendships, and success. Sure, by now Sex and the City has standout moments where it feels a tad dated and unbelievable, but there is no question that Charlotte, Miranda, Samantha, and Carrie gave us so many timeless life lessons on love, dating, loss, and moving on. “I couldn’t help but wonder” what would happen if I took the teachings of Sex and the City and applied them to my own life. Which character would I be most like? Would I learn more about myself and my love life through the lens of these characters than I have so far in real life? Honestly, it felt like I would.

When I think of Charlotte, I generally think of her as being uptight and judgmental. I mean, she’s a somewhat stuffy gallerist who loves pearls, Burberry, and judging Samantha (for the same reasons she should be judging herself though, honestly). But despite the perception of her being uptight, we definitely see her walls come down throughout the course of the series. From Charlotte, some who seems to have everything, I unexpectedly learned a lot about loss and letting go. Charlotte definitely goes through some of the hardest experiences life and love can throw your way. Between her divorce from Trey and complications with fertility, she teaches us a lot about how to handle and overcome heartbreak and crushing disappointment. Though I have to say that for me, ending a relationship that lasted nowhere near as long as her and Trey’s isn’t exactly as extreme, her story gave me the sense that just because something doesn’t work out doesn’t make it a failure. There’s always a reason for it, and a way to rise beyond it and make your life even better than it was before, regardless of how much you loved someone before it fell apart. But, in order for that to happen, you have to put yourself back out there and take a chance on new people, even if the pairing doesn’t seem likely initially. Just look at how she and Harry ended up working out! You may not expect it, but it’s totally possible to find love where you least expect it, when you least expect it.

Miranda is definitely the most realistic out of the bunch, but she’s definitely is, to put it nicely, the most blunt and tells it exactly like it needs to be told. It may be what gets her a bad wrap with some fans, but someone has to be honest. Plus, it’s only because she cares about her friends so much. Plus, despite how dated the show can be at times, Miranda’s stance on so many things seems to stand the test of time the most. In comparison to the other characters, it may have been more noticeable, but today her unfiltered ideas and authentic understanding of herself is something that most women strive for today. In terms of dating, she also is the most progressive in a series that otherwise lacks a lot of diversity. She taught me it’s totally okay to be the realest version of yourself, while also looking outside of yourself and your own comfort zone to find people that you could end up interested in. She and Samantha infamously agreed that there is no such thing as a single soulmate, and in my own dating life, I am definitely beginning to agree.  There isn’t one person out there that is going to complete you, as you’re already whole the way you are. The only thing other people can do is complement what is already there, and you already are your own soulmate. This concept has resonated with me for a long time, so much so that I got a tattoo from one of my favorite books that symbolizes this idea. But who knows, maybe Miranda also had something to do with the inspiration deep down, too.

To be completely honest, I admire Samantha to an extent. She has an amazing career, makes a ton of money, and she takes what is hers – both in her career and in relationships. She turns the tables on societal norms goes through guys like guys stereotypically go through women, More than that, she does not take crap from anyone. A try-anything-once kind of girl, her adventurous spirit is definitely admirable. She doesn’t judge other her friends and supports what is best for them. If there’s anything that Miranda makes completely obvious, it’s that self love and self confidence is the absolute most important thing a person can give to themselves. When you have both of those things, you find an inner peace with whatever life throws your way, no matter what the struggle is. You can put yourself first without that meaning that you are selfish. You can still work hard and put your best foot forward in your career, and have it pay off. Samantha definitely trumps the idea that women can’t have it all (speaking of Trump, did you see the episode where he flirts with her…!?). When I tried to apply Samanthas lifestyle to my own, I have to admit that I couldn’t wrap my head around trying to be as promiscuous. I am throwing no shade and am not shaming her decisions at all, I am fully pro Samantha doing whatever the hell she wants, but I personally just couldn’t swing trying to have quite as many partners as her. What I have applied is the full blown confidence, and pursuing the things you do want fiercely. I’ve been more direct, more forward in my relationships and with work since making note of Samantha’s ~numerous~ successes. But at the end of the day, she’s also taught me that being single is totally fine and there’s no need to rush anything, because it’ll definitely come. No pun intended.

And last but not least, there’s Carrie. She’s wild at heart, and she loves relationships that are just as wild as she is. Or if not wild, at least a bit messy. Oh, and duh, she loves shoes. An it-girl and icon in every sense of the word, she was (and remains to be) an obvious fan favorite. To be completely honest, I knew about Carrie’s antics and crazy relationships before I even watched a single episode of the show. I have to say that I’m a lot less high maintenance and fashion forward than her, but everyone has to respect that she really does have amazing taste in clothes and an impeccable wardrobe. So, my first takeway from Carrie is simple. It’s to always put my best foot forward, even if my footwear may never be as fashionable. To be fair though, if I was willing to risk being able to pay rent for a pair of shoes, I may be able to compete with her. You don’t have to go crazy with your appearance, or try harder than necessary for anyone, but it is important to care about yourself and present yourself in a way that makes you feel your absolute best – for you. When you look good, you feel good, and that definitely translates to fierce confidence when on a date or making a first impression when meeting someone new. Don’t settle for anything less than the perfection you deserve for yourself, which leads me to my all time favorite Carrie Bradshaw quote: “Some people are settling down”, some are settling and some people refuse to settle for anything less than butterflies.” It may sound like the cheesiest thing in the world, but I find it to be so true. If something or someone doesn’t make you feel amazing, don’t give it your time or your energy. If the thought of being with someone doesn’t excite you in a unique way, don’t waste your time. Life is too short to spend it with someone that doesn’t feel extraordinary to you.

5What I’ve learned overall from Sex and the City

If there is one thing I have learned from all of the episodes I have watched and conversations I have had with friends about this one-of-a-kind show, it is that everyone is deserving of love. It is not an easy path to discovery. It’s hard, it’s messy, it’s heartbreaking, it’s hilarious, it’s confusing, and it’s a journey that is completely your own. But just because it is your own, does not mean that you’re alone. You’ll always have friends to help you along the way, to lean on, to laugh with, to judge with, to make mistakes with, and to help you make sense of whatever the heck love is anyway.